We’ve got to get these at the store!

No, not more chicks into gaming (well, actually we could use more of those too… ), but Scooter Desks! Mind you we’d have to get a wireless setup and switch to laptops, but just think of it… instore races how much more cool would any racing game be?Â

Marvel Comics confirms that Steve Rogers (the original Captain America) is still quite dead.Â So, who is the new man behind the mask (and the gun and knife)?Â Arriving in January 2008, “Captain America” #34 is sure to answer these and other pressing questions =) Place your orders today! Deadline is December 13, 2007.

I’m sure a lot of people will see the gun and automatically think: the Punisher. But, Frank’s just been put through the ringer in “Punisher: War Journal” as he wore his own version of Cap’s costume- so it can’t be him. Next best guess? The Winter Soldier! New readers may not be familiar with Cap’s long-lost-sidekick-turned-antihero-then-turned-hero. Check out “Captain America: The Winter Soldier” VOL 1 + 2 available now!

Some more Captain America savvy readers have given me their theory: they think the new Cap will be that mysterious soldier (not the Winter Soldier) that made his debut only a couple issues ago. You’re probably right, Mike and Rob!

Wizards Of The Coast (WOTC) has posted two new previews to their new Star Wars Minis set, Force Unleashed,” arriving this November 16, 2007: the “Shadow Guard” and “Vader’s Apprentice, Unleashed“. Check them out here:

The REAL “Vader’s Apprentice, Unleashed” isn’t Verne Troyer (though wouldn’t it be cool ifÂ Verne were to be the real apprentice?). Not too much info available on this guy quite yet, we’ll just have to pick up the new “Force Unleashed” video game from LucasArts and find out:

Our next Theme Event was suggested by Andrew MacDowell (Thanks, Andrew!). After a bit of searching, Matt and Brett (Thanks, guys!) directed me to page 15 of the new rulebook (not the forums, which I was told to go to before- d’oh!).

0. This event starts on Sunday, October 28, 2007 at 1 PM– please register between noon and 12:45 of the same day. the logic behind this rule is, the sooner everyone registers, then the sooner we can start playing.

0.2 Please keep in mind this is a theme event; it’s meant to make the game environment more fun/casual, rather than competitive. So, if you have a problem with one of the rules, I will make a note of it and the next time we try the same theme, hopefully we can adjust the theme to make it better for everyone. Please be constructive.

1.2 If a player decides to play the “Dark Side” faction, he/she may use characters from: Sith, Mandalorian, Separatist, or Empire (NOTE: Yuuzhan Vong will not be usable in this format because we’re choosing not to recognize the “New Jedi Order” era). He/she may use/mix any or all “Dark Side” factions. For example, a player may use “Darth Vader, Jedi Hunter” who is an Imperial with “Darth Bane” who is from the Sith faction.

2. Players may use 100 points or less to build their teams. Players may not use more than 100 points (unless they have a special ability that allows them to; for example, Reserves).

4. Prizes will be awarded Randomly– they will not be awarded according to placing in the event. 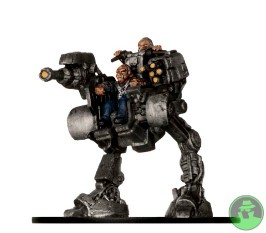 Garnett and Carolyn better watch out for this intergalactic partycrasher! =)

The Uggernaut (I didn’t name it, kids)Â can be found in the next set of Star Wars Miniatures, Force Unleashed,Â arriving this November 16, 2007 (just in time for Christmas)!

We’ve also got anotherÂ special event for this party animal to crash: our “Force Unleashed” Release Event planned for Sunday, NovemberÂ 18, 2007 at 1 PM. Prizes will be from Wizards Of The Coast, the good people that make this fine game! We’ll give out exclusive Squad BoxesÂ to theÂ top 15 players! Watch for more info soon!

Garnett Germain and Carolyn Ploof are getting married! Yay!

As a result, our store hours are going to be slightly changed for one day only: Saturday, October 13, 2007 we are open from 4 PM until 9 PM. Our events for the day include:

4 to 6 PM: WoW CCG:Constructed Singles, No Charge to play!

Congrats, Garnett and Carolyn! And I’ll see you all at the games…

Last week, Lillian purchased a box of boosters of “Fires Of Outland” and funny thing: she pulled a Loot card, Spectral Tiger (the one pictured up top). Loot cards are ultra rares that have a scratch area on the face of the card- the scratch area has a special redemption code that you can use to get exclusive ingame (virtual) items for the World of Warcraft computer game. The odds of pulling a loot card in a booster pack are approximately 1:96 packs (or roughly 1 in 4 booster boxes). Now, I’ve openned aboutÂ 8 boxes (of Heroes Of Azeroth, Dark Portal, and Fires Of Outland total) and I have not pulled a single loot card, yet Corey (one of the regular youngsters) has pulled 5- that’s right FIVE! Not all loot cards are all that expensive- Lando Longshot (loot) doesn’t really match up to our good friend the Spectral Tiger (loot) dollar-wise.

08/25/2007: Congrats to the new Vampire: The Eternal Struggle Western Canada Qualifier champion: Michael Holmberg! After two rounds plus finals, Michael emerged victorious with his Imbued deck! Also, special thanks to: our host Cam Kennedy (for running a great event and for providing the original art, “Blood Siege,” after which this annual event will be named) and thanks again to everyone who attended.Â 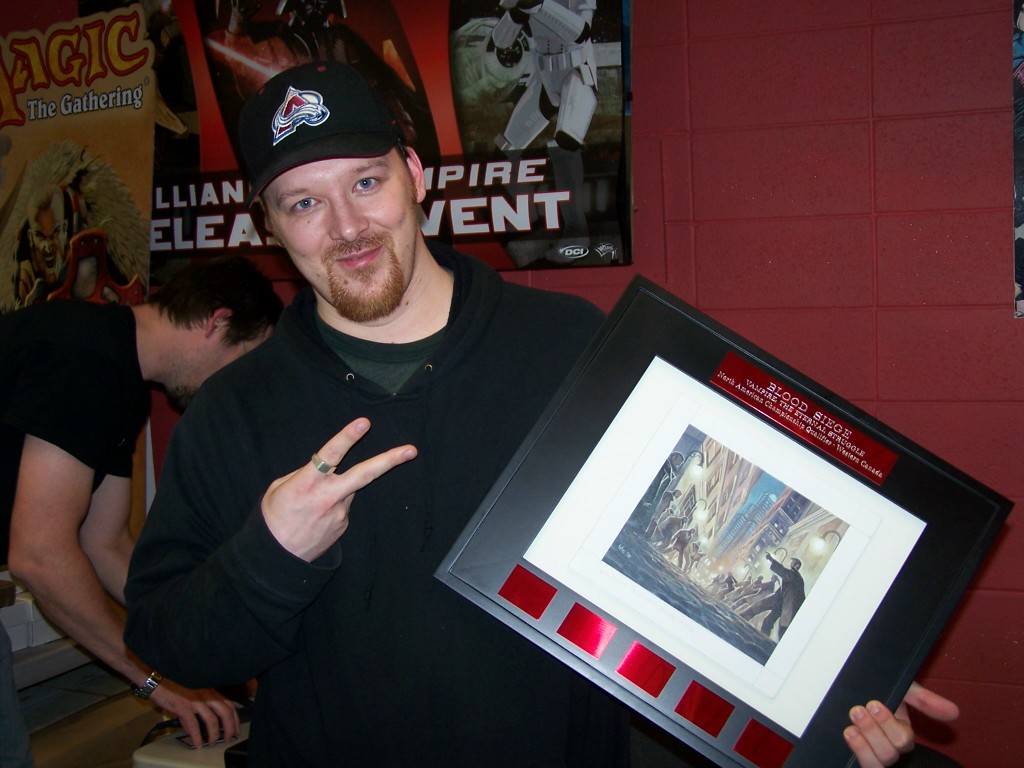 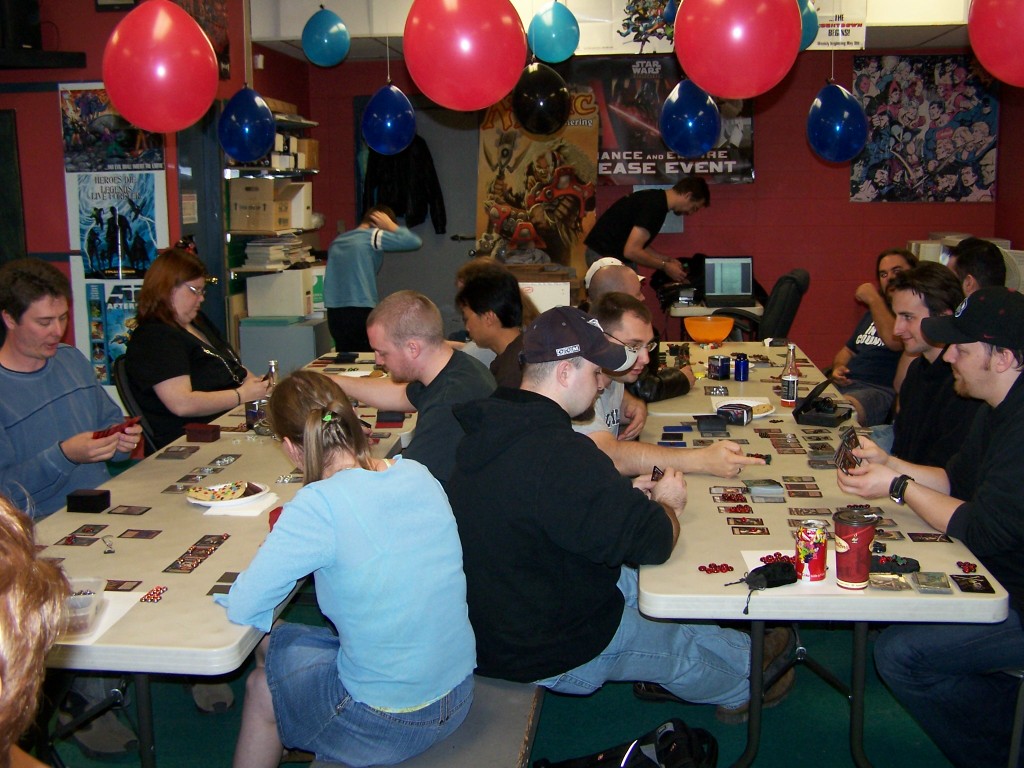 Our September 2007 Calendar is back up- properly sized and rotated to the right; so you can actually read it without turning your head sideways =)Â Regards,